Turning the Catch of the Day into Improved Livelihoods

Cross posted from Worldwatch Institute's Nourishing the Planet and written by Christi Zaleski. 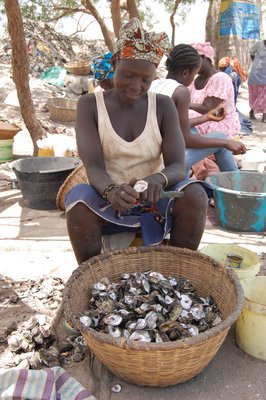 Harvesters process oysters for sale by boiling, shucking, and sorting meat. At some landing sites, such as here at Lamin Lodge, the women have become a tourist attraction with tours of the area including an explanation of the women's work.

Leaving Gambia’s capital city, Banjul, you’ll find a group of women standing road side offering up oysters for 15 dalasis a cup, or about 55 cents for approximately 75 pieces of oyster meat. These women in the community have been harvesting oysters from the extensive mangrove wetlands of Gambia for decades. Much of the harvesting is concentrated in Tanbi National Park, a Ramsar site, or wetland of international importance. Surprisingly, the mangroves themselves have undergone little change during the last thirty years, even as the population of the country, increasingly concentrated around Tanbi in the Greater Banjul Area, more than doubled during that period.

Although the mangroves remain healthy, the oyster harvesters have witnessed the effects of increased pressure on the oyster population first hand. The women report that oysters today are smaller and harder to find than thirty years ago or even ten years ago. Even with the increased effort required to harvest, more women are harvesting today than in the past. These women rely on oysters for their livelihoods and contribute to food security in a country that is heavily dependent on seafood for protein.In 2007 a group of oyster harvesters organized themselves into a producer association called TRY Women’s Oyster Harvesting Association. The first members decided to call the organization TRY, because it was an effort to do just that - try to improve the situation for oyster harvesters without much certainty that their efforts would pay off. After some initial success fund raising to buy boats, membership in TRY grew rapidly from fourteen women in just one village to 500 oyster harvesters from fifteen communities across the Greater Banjul Area today. This growth was no small feat. Although the women are all Jola, a minority ethnic group in Gambia, they are divided into different sects with distinct languages and heritages. Through TRY, the harvesters have been able to put aside these differences and work as a cohesive community making decisions by consensus and collectively prioritizing needs. 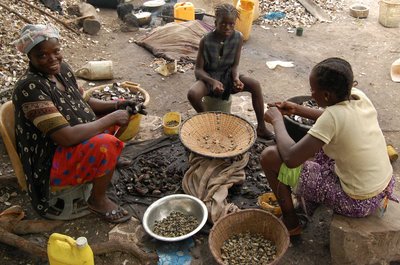 Harvesters shuck oysters at landing sites with the help of family members. Women can also enlist the help of retired harvesters to help shuck for the price of breakfast, three cups of oyster meat, and about a dollar a day. (Photo credit: Christi Zaleski)

Two years later in fall 2009, TRY became linked with the USAID funded Sustainable Fisheries Project, Ba Nafaa. Ba Nafaa has helped TRY expand the scope of its mission and has worked to create a sustainable co-management plan for the oyster fishery that respects the needs of harvesters, consumers, and the environment.

In their short time together TRY and Ba Nafaa have already made some important strides in working toward improved livelihoods and fisheries practices. The women have collectively agreed to practices that may be difficult in the short run, but pay off over time. Traditionally, oysters are harvested during the dry season, with the wet months of July through December closed for harvesting. This year, the communities agreed to extend the closed season until March. When harvesting resumed in the spring, the women saw the benefits of the extended closure immediately, noticing a marked increase in the size of oysters for harvest. Additionally, each community agreed to close one bolong, or tributary, in their territory for the entire year to encourage regeneration of the oyster population there.

The women are also adopting practices to ensure that Tanbi remains a healthy mangrove ecosystem. Harvesters are learning about the ecological importance of mangroves and how destructive practices like cutting roots with machetes to collect the attached oysters damages the capacity of the ecosystem to support oyster populations and fish nurseries. They are sharing these lessons with one another and the Gambian public through short plays demonstrating proper harvesting techniques and sharing information about mangrove ecology. In a country stretched for resources, the oyster harvesters are also helping the Department of Parks and Wildlife Management police the wetlands by reporting observations of illegal fuel wood harvesting to local officials. The women are experimenting with shellfish aquaculture to help relieve pressure on wild stocks and limit the harm to mangroves. 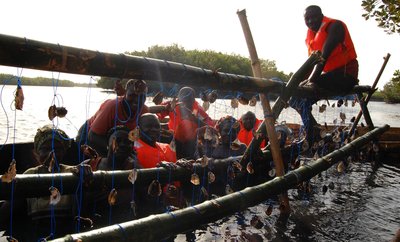 One of the first accomplishments of TRY was to raise the price of oysters from ten dalasis per cup to fifteen. Customers have been willing to pay the new price, a partial acknowledgment of the value of these harvesters’ effort. One of the big goals for Ba Nafaa and TRY, however, is to see that number grow exponentially by opening up new markets in the high end retail outlets serving tourists. This would be greatly aided by establishing a permanent market for harvesters who now must rely on customers stopping by the side of the road or at temporary markets in the major cities in the Greater Banjul Area. Eventually, the harvesters could develop an export market to the United States or European Union, which could yield prices high enough to create living wages for harvesters. In the meantime the oyster harvesters will continue to be found selling their catch along the road outside of Banjul, and working together to try to improve their situation.

Christi Zaleski is concentrating in environmental studies at Brown University and is spending the summer in Gambia working with the Gambia-Senegal Sustainable Fisheries Project Ba Nafaa.

Thank you for reading! As you may already know, Danielle Nierenberg is traveling across sub-Saharan Africa visiting organizations and projects that provide environmentally sustainable solutions to hunger and poverty. She has already traveled to over 18 countries and visited 130 projects highlighting stories of hope and success in the region. She will be in Burkina Faso next, so stay tuned for more writing, photos and video from her travels.

If you enjoy reading this diary, we blog daily on Nourishing the Planet, where you can also sign up for our newsletter to receive weekly blog and travel updates. Please don’t hesitate to comment on our posts, we check them daily and look forward to an ongoing discussion with you. You can also follow us on Twitter and Facebook.

Previous Next Table of contents