Fighting for Farmworkers’ Rights for More Than 40 Years

This is the first of three parts of an interview with Baldemar Velasquez, President and Founder of the Farm Labor Organizing Committee. In Part One, Mr. Velasquez describes the biggest challenges and abuses farm workers face in the U.S., and what it was like for his family to work in America’s agricultural sector. Cross posted from Worldwatch Institute's Nourishing the Planet. 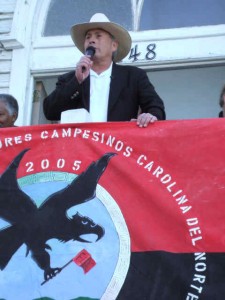 Bio: Incensed by the injustices suffered by his family and other farm workers, Baldemar Velasquez founded the union of migrant farm workers, Farm Labor Organizing Committee (FLOC) in 1967. FLOC works tirelessly to give voice to migrant farm workers across the country and include them in decision-making processes on conditions that affect their lives. Mr. Velasquez is a highly respected national and international leader, not only in the farm labor movement, but also in the Latino and immigrant rights movements.

What is your background, and how did you come to found FLOC?

My family was recruited into the migrant worker stream back in the early 50s from South Texas to harvest tomatoes, sugar beets and other hand-harvest crops in Ohio, Michigan and the Midwest. That began my long odyssey to this work, getting stranded in Ohio and not making enough money to get back to Texas. In those early years we didn’t even have our own transportation and we got so in debt one fall, we had to stay the winter and borrow more money from the local farmers just to stay alive. Then we worked off the winter debt the next summer– working for free in the fields. We then stayed another winter and were in debt again, we sort of became like indentured workers for about seven years.

Just to get out of debt we traveled the summers around the mid-west to find the back-to-back-to-back crops. In Michigan with the cherries and the strawberries, and trimming Christmas trees then back to Ohio for the sugar beets and the tomato and cucumber harvest, right into the fall and picking potatoes for the local farmers. So that’s how we just tried to keep out of debt and try and survive the winter so we could survive the following summer.

The silver lining in all of this was that I was able to learn English and stay in school – it was cold at home and warm in the schoolhouse so I kept going back to school. I ended up going to college – almost by accident! I didn’t think that college was for Mexican kids, I thought it was for white kids, and my senior literature teacher said, “Why not?” My grades were good enough. During college vacations I would go back to the fields to work and by my senior year I was already organizing my dad and his friends, and my mom and her comadres in the fields.

Can you describe some of the biggest challenges and most common abuses faced by farm workers in the United States?

Well there’s the outward abuses, like stealing your wages, getting cheated in your pay, employers cooking the books and falsely reporting the wages of workers. And a lot of times they hide it – like in our family, our whole family worked together but only my dad and my mom would get a paycheck. So they reported it as individual earnings, but it was really the collective earnings of all of us who worked on piece-rate crops. We were regularly cheated out of minimum wages. And as long as people were working piece-rates, getting paid by the bucket, by the acre, by the lug, by the crate, by whatever container or unit we were working and getting paid for, the record keeping of hours was very sporadic and very distorted.

Then there’s the disregard for the health environment of the workers, the labor camps where many times the legislation was so lax that you could house people in chicken coops and barns, and still qualify to have registered labor camps. And even then, whatever laws were in the books were never enforced anyway. So we grew up in very bad labor camp conditions. So there’s that environmental factor.

And then the human abuse, the tongue lashings that workers would get, that women would get from unscrupulous labor contractors, crew leaders, field men, and even some farmers. One of the things that would really shock me and anger me was the way they would talk to my mom, in ear shot of my little sisters who were all smaller. Well, it makes a young man very angry, and you want to do something but you don’t know what to do.

So those are the kinds of abuses that we grew up with. By the time I was old enough to think about this seriously, I thought well, when I grow up, if I can do something about this, I’m going to do something!

How common is child labor is in agricultural production today and do you think labor policies can address the problem?

You know, we’ve had child labor laws on the books for a long time. And the problem with any kind of laws governing the agriculture sector is the lax enforcement, or no enforcement at all. I started working the fields when I was six. By the time I was eight or nine, I was already carrying an adult load in terms of ability to harvest the number of lugs or crates or baskets or hampers or whatever.

And as far as putting more inspectors in the fields to enforce child labor laws, it’s a two-edged sword. The reason parents have their kids in the field is not because they like child labor, but really in our family, the alternative to that was not eating. And that’s what it boils down to. And it’s very easy to say, “yeah let’s pass some laws and get really tough enforcement and big fines for those who have kids in the fields,” but if you get the kids out of the fields – okay, so then what? You let them languish in the labor camps all by themselves? They have nothing to do. Or you take away an adult wage-earner to stay home and baby-sit him? Take away that income from the family?

You cannot talk about eliminating child labor without dealing with the other family impacts – for instance family income. The kids may not create as much income as an adult worker, but it is income. And we used to pool our income as a whole family to make ends meet, to stay alive. And so you’ve got to deal with the wage issue. You’ve got to make the job where adults can earn a living so the kids don’t have to be in the fields and you can still provide for them, you can still give them food. All of these have to be answered together – you can’t just say, let’s eliminate child labor. All these advocates in Washington talking about child labor laws and so on, well-intentioned as it is, they’re not addressing the other issues.

What are some of the health hazards that farm workers face?

Every crop has different foliage and its own chemical make-up, and sometimes people have allergies and react to them. Not to mention the residue that might be on some of those crops – the fungicides, the pesticides that they spray on them, and the lack of enforcement on reentry time in the field. You can have all the regulations you want – if you don’t have a way in which workers can police that and be able to decisively do something without fear of retaliation, then the laws aren’t going to do you a lot of good.

I’ve watched over the years well-intentioned efforts like the Environmental Protection Agency’s Worker Protection Standards, and the required training of workers around pesticides and so on. And they have put millions into funding organizations to train workers about pesticide safety. Well, here’s my question: a worker gets out of bed in the morning, and he sees a farmer who just finished spraying a field, and the crew leader takes him out there and says, “Okay – time to go to work”. And he’s educated about the reentry time, and knows it is too early to go back in. (The more toxic ones have longer reentry periods – two, three-day reentry period). And sitting on the edge of the field – the difference between a trained worker and an untrained worker, is either that you’re knowingly going to go in and get poisoned, or you’re not knowingly going to get poisoned. The guy that knowingly goes in and gets poisoned, what’s his choice? What are his options? Not go and maybe get fired? And get retaliated against? What do you have on the books to protect him from being retaliated against, and how is he going to process that – file a complaint with the Department of Labor, who might respond in two weeks? And then you have to pack up and go make a living with your family somewhere else. Where is the follow-up on that particular incident? What good does it do you that day? That’s the problem.

So there’s the problem in terms of the chemicals, the residues on the plants. There’s also the climate issue. We have had nine deaths in the fields of North Carolina in recent years, and seven of them from heat stroke. This summer already, among our membership, we’ve had two heat stroke cases: One guy is still in a coma, and the other fellow just came out of a coma. We have him in a hospitality place down where we’re working on his workers’ compensation case and in the past those workers who didn’t have an organization, well they were out of luck. They were forgotten, put on the bus and sent back to Mexico, or just left to languish wherever they are.

So a lot of that is just due to pure neglect. The farmers can be held accountable, but workers have to have a right to make decisions about when they can walk out of a field, when they can file a complaint or a grievance with the employer. Already this summer we’ve probably processed a couple of hundred complaints from workers.

Stayed tuned to parts two and three of this series, which will focus on how FLOC helps farmworkers gain a seat at the negotiating table, and ways consumers can get involved. To read more about workers in our food system, see In a Global Food System: Breaking Down Barriers and Improving Livelihoods for Food Workers and Making Sure the Food Industry Works for its Employees.

Ronit Ridberg is a research intern with the Nourishing the Planet project.

Thank you for reading! As you may already know, Danielle Nierenberg is traveling across sub-Saharan Africa visiting organizations and projects that provide environmentally sustainable solutions to hunger and poverty. She has already traveled to over 18 countries and visited 130 projects highlighting stories of hope and success in the region. She will be in Benin next, so stay tuned for more writing, photos and video from her travels.

If you enjoy reading this diary, we blog daily on Nourishing the Planet, where you can also sign up for our newsletter to receive weekly blog and travel updates. Please don’t hesitate to comment on our posts, we check them daily and look forward to an ongoing discussion with you. You can also follow us on Twitter and Facebook.

Previous Next Table of contents