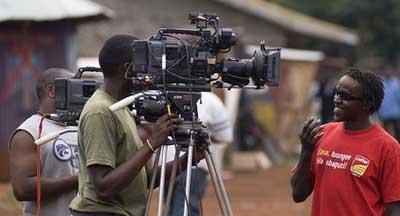 The last place most of us look to for useful information is television soap operas. But Makutano Junction, a Kenyan-produced soap opera set in the fictional town of the same name is not your average TV drama. Broadcast in Kenya, Uganda, Tanzania, and throughout English-speaking Africa on Digital Satellite Television (DSTV), Makutano Junction doesn't deal with the evil twins, amnesia, and dark family secrets typical of U.S. daytime dramas. Instead, the show's plot lines revolve around more grounded (although not necessarily less dramatic) subjects like access to health care and education, sustainable income-generation, and citizens' rights.

Funded by the U.K. Department for International Development, produced by the Mediae Trust, and broadcast by the Kenya Broadcast Corporation, the show was originally designed as a 13-part drama in 2004. But Makutano Junction was since developed into a six-season TV phenomenon, with over 7 million viewers in Kenya alone. Its website provides all the information one might expect from a television show site, including episode summaries and character profiles. It also features "extras" on themes from specific episodes and encourages viewers to text the producers for more information.

In Episode 8 of Season 6, which aired in 2008, the character Maspeedy gets into trouble for soaking seeds. Seed soaking works by essentially tricking the seed into thinking it has been planted, allowing it to soak up in one day as much water as it would in a week in the soil. This speeds up germination and significantly shortens the time between planting and growth, leading to a vegetable harvest in a quick amount of time.

But the other characters in the show are unfamiliar with this practice and, when they discover Maspeedy's project, have him thrown in jail because they are convinced that he is brewing alcohol illegally. After some plot twists and a little slapstick humor involving two trouble-making characters who attempt to drink the water in order to get drunk, the truth comes to light and Maspeedy is released from jail. He then teaches the rest of the town the simple technique of soaking seeds to speed plant-growth time.

After the episode aired in May 2008, thousands of viewers sent texts to Mediae  requesting more information about seed-soaking techniques. These viewers were sent a pamphlet with detailed instructions on how to soak their own seeds. Follow-up calls-- which were part of a study to test the effectiveness of the show's messaging-- revealed that 95 percent of those who had texted for more information had found the pamphlets helpful. And 57 percent had tried out seed soaking even before the pamphlet arrived, just based on the information provided on the show. Ninety-four percent said that they had shared the information with up to five other people.

By peppering the drama-infused lives of its characters with demonstrations of agricultural practices, trips to the doctor for tuberculosis tests, and Kenyan history, Makutano Junction serves to both entertain and provide reliable information for families throughout sub-Saharan Africa. This is soap opera drama that people can actually relate to--and learn from.

To read more about innovations that use entertainment and media to alleviate poverty and hunger see: Using Digital Technology to Empower and Connect Young Farmers, Acting it out for Advocacy and Messages from One Rice Farmer to Another.

Thank you for reading! As you may already know, Danielle Nierenberg is traveling across sub-Saharan Africa visiting organizations and projects that provide environmentally sustainable solutions to hunger and poverty.  She has already traveled to over 19 countries and visited 130 projects highlighting stories of hope and success in the region. She will be in Benin next, so stay tuned for more writing, photos and video from her travels.

If you enjoy reading this diary, we blog daily on  Nourishing the Planet, where you can also sign up for our newsletter to receive weekly blog and travel updates.  Please don't hesitate to comment on our posts, we check them daily and look forward to an ongoing discussion with you. You can also follow us on Twitter and Facebook.

Posted by BorderJump 14:25 Archived in Kenya